The personality who coined the term "Tribology", Peter Jost who was born on 25 January 1921 has made tribology known worldwide and tirelessly stressed the importance of tribology for research, for economy, and most importantly for society.  . He began his professional career as a mechanic apprentice in his uncle's workshop, where he undoubtedly laid the foundation for the knowledge required for his later career, as well as the extraordinary sensitivity for pressing problems and their resolution through technology.

Later H. Peter Jost graduated in Mechanical Engineering from the prestigious Universities of Liverpool and Manchester and became Managing Director of an international lubricants company in London at the age of 29. He subsequently worked as a lubrication consultant in various operational and managerial capacities, most recently as President of the K.S. Paul Group, Specialty Lubricants (1974-2000); President of the Eley Estate Company Ltd, Lubrication Equipment, (1986-2001) and Engineering & General Equipment Ltd, Lubrication Systems, (1977-2006).

H. Peter Jost formed a committee on behalf of the British Government in 1964 to prepare a report on the situation ("Jost Report") with regard to training, research and industrial requirements of the subject of "lubrication". In this report - published by the British government on 9 March 1966 - the term "Tribology" was first used to describe a comprehensive concept of the "science and technology of interacting surfaces in relative motion – taking into account the methods involved" and set the beginnings of a “generic physics-based, multi-disciplinary science of friction and wear” (in Peter Jost’s own – probably to the public more understandable – words, as emphasized still 2016).

Prof. Jost has consistently pursued his mission of making the tasks of tribology known to the public (especially in politics and business), implementing them in industry and imparting them in scientific-technical education in a number of public functions, be it as a founding member, council member or chairman of relevant working groups and committees, first of all to be mentioned as the founder and long-standing President of the International Tribology Council – ITC (international umbrella organisation of tribology societies and associations). He has also held important positions in a number of professional societies and institutions.

In March 2016 – only about three months before he passed away on 7 June 2016 – he was still able to initiate and guide the celebration the 50th anniversary of tribology at a festive event organised by the ImechE (Institution of Mechanical Engineers) and, above all, at a reception hosted by HRH Prince Philip (who sadly passed away on March 9, 2021) at Buckingham Palace, London, which he had prepared in detail for a circle of tribologists from all over the world.

For his outstanding professional work and especially for "shaping" tribology, H. P. Jost received a number of awards, such as the Commander of the Order of the British Empire (CBE, 1969) and the Austrian Cross of Honour for Science and Art 1st Class (2001). Peter Jost has also received numerous academic awards, such as honorary doctorates (Universities of Salford, Bratislava, Leeds, Bath, Budapest, Manchester and Sofia and the Academy of Sciences of Belarus) and professorships (Universities of Liverpool and Wales).

As well, a number of scientific academies, engineering societies and in particular national tribology associations from Europe and overseas have honoured Prof. Jost’s services with honorary memberships or prizes. To mark his unique commitment, as an example and in the spirit of sustainability of educational initiatives, a number of academic institutions are named after him: the Peter Jost Enterprise Centre (Liverpool John Moores University, 1995), the Jost Institute of Tribotechnology (University of Central Lancashire, 2002) and the Jost Chair of Engineering Tribology (University of Leeds, 2003).

H. Peter Jost continuously followed the development of tribology in a lot of countries in the world and he participated with amazing vitality even at an advanced age in international tribology congresses, such as the World Tribology Congress in Turin, Italy, 2013, or the International Colloquium Tribology at the Technische Akademie Esslingen (TAE), Ostfildern/Esslingen, Germany, 2016.

On the occasion of important tribology congresses, Prof. Jost usually gave the official opening speeches, in which he conveyed forward-looking programmatic messages on behalf of the International Tribology Council on the important tasks of tribology and its significance for technology, society, economy, and the environment. Let us recall the essential themes or outstanding challenges as communicated in his programmatic speeches on the occasion of the 4-yearly World Tribology Congresses, such as (in brief)

Tribologists worldwide are still confronted with the challenges mentioned and are encouraged to perform their so important tasks in research, development, and application - ambitiously and efficiently! 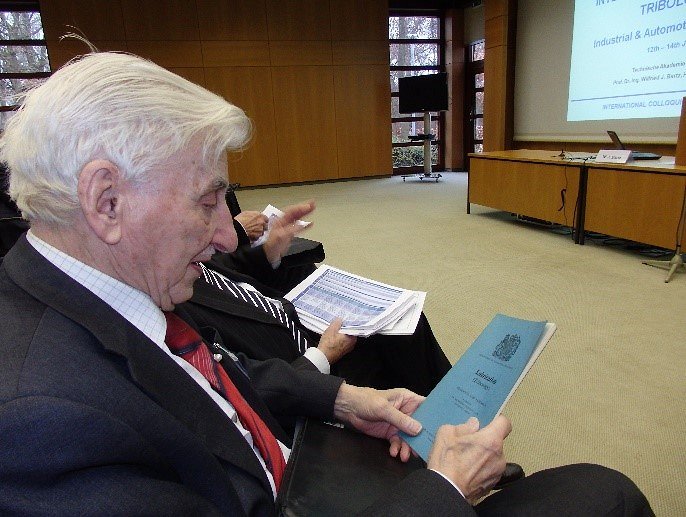 A truly symbolic photo: Prof. Dr. H. Peter JOST on the occasion of the "20th Colloquium Tribology" at the Technische Akademie Esslingen (January 2016), leafing through the cornerstone of his life's work: the historical "blue book", the "Jost Report", presented on 9 March 1966.